We prove parts (a) and (b) at the same time. Then, we prove Apostol’s comment in part (b).

Proof. We show a bit more than requested, not only that

. The proof is by induction. For the case 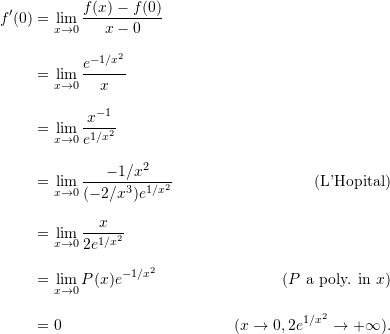 Now, assume we have shown 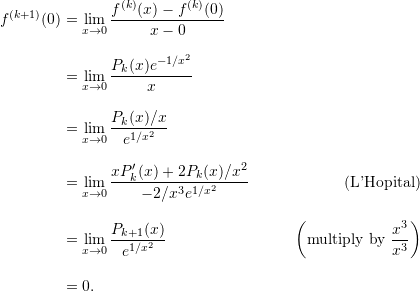 . Thus, we indeed have

Proof. Since we have shown in part (a) that

, the Taylor’s series generated by

about 0 is just the zero function. This clearly converges everywhere on

since it is always

. Therefore, we see that the Taylor series generated by

about 0 converges everywhere on

(Note: This turns out to be an important example. In real analysis the fact that we can have a Taylor expansion for a function that converges everywhere, but does not represent the function breaks a lot of theorems we wish were true. It turns out this is why complex analysis is so much nicer than real analysis. In the complex case if we have a Taylor expansion then it does represent the function. Anyway, this example will come back many times if you keep doing analysis, so it’s worth understanding it now.)