Determine what happens to

will be continuous at

First, we sketch the graph of 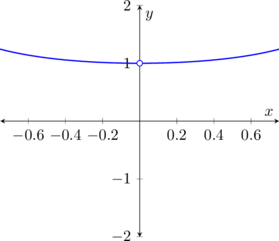 To determine what happens to

we can take the limit, (recalling that

is not defined at

it is not continuous there. However, since the limit exists we could redefine

since it is defined there and

Note what we have done here. We had a function

which was undefined at the point

. We created a new function (which we also called

, which is a bit confusing) that took the same values as the original function for all

, and took the value 1 when

. In this way we “removed” the discontinuity of the original

, but we should be aware that this is actually a new function (since it has a different domain than the original).