with equality if and only if

Proof. We consider two cases: the first one is the case that

, and the second is the case that

. The proof is by induction on the number of terms

, and by assumption at least one of these is not equal to 1. But, if one of them is not 1, then neither is the other (since the product must equal 1). So, 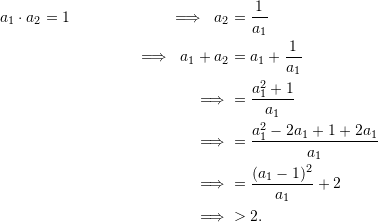 Where the final inequality follows since

by assumption. Therefore, the inequality indeed holds for the case

.
Assume then that the inequality holds for some

, then there must be some

, then there is some

with one member of the pair greater than 1, and the other less than 1. Without loss of generality (since multiplication and addition are commutative), let this pair be

is greater than 1 and the other is less than 1, so one of

is positive and the other is negative), we have

Hence, the inequality holds for

; and therefore, for all